Brrrrr! Who knew I wouldn't be able to post again until it was time to pull out the winter coats! I've never thought of myself as someone who owns a lot of coats. I usually have one that I wear for many years (like the basic black leather one that I had before these came along). As I have gotten older, and my desire to "not look like everyone else" has become greater, I realized that the coats I had carried stories - besides being conversation pieces in their own right.
You can read the original Train Stop post here, but this embroidered number is from the brand XOXO and was purchased at Macy's about 8 years ago in the after season sale. I sooooo needed a new coat, as hard as it was to give up the black leather I was so used to. This was so different for me, and maybe the start of that change in me. I still love this coat and get asked about it every season. 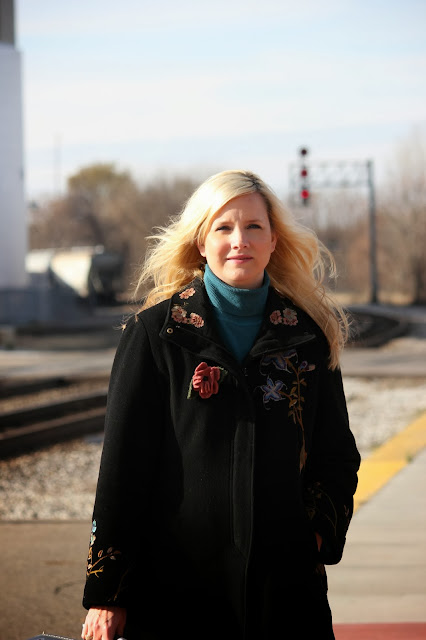 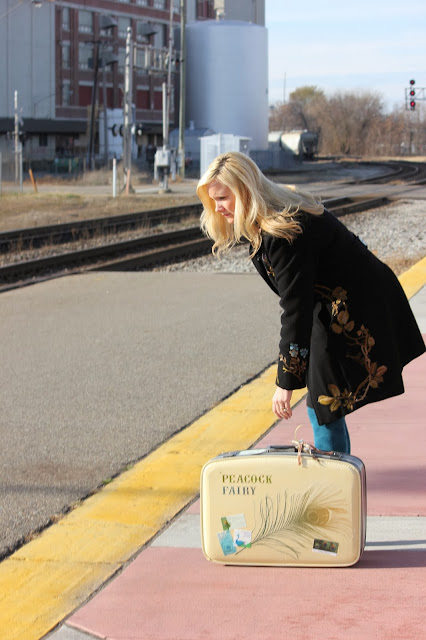 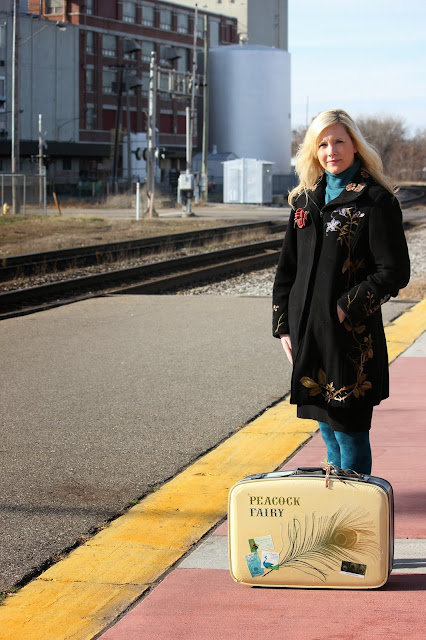 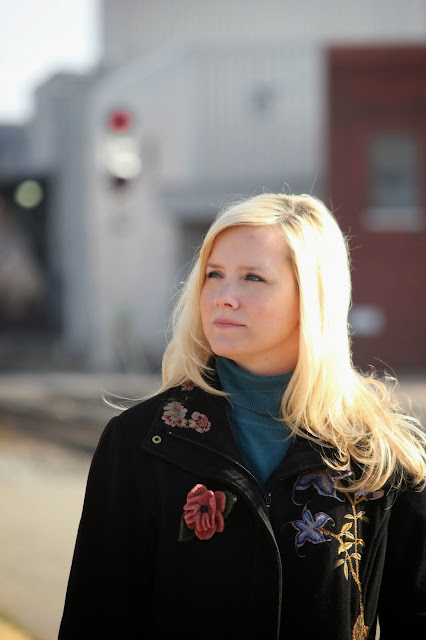 I picked up this boucle plaid soon after I had my son. It's The Buckle's own house brand, BKE. It was my birthday and we were killing time at the mall before we were heading out to eat. I had some birthday money to spend and this caught my eye - first the unique colors, then the big mismatched buttons! It is hard to capture, but the shades of teal, pink, olive green, forest green, black and tan remind me of a peacock of course! At the time, it had been 6 years since I bought my embroidered coat so I thought it was time for something new. Since it has so many colors, the possibilities are endless to accessorize. I keep changing out the pin on the lapel, and have settled on this peacock pin from Kohl's for the time being. 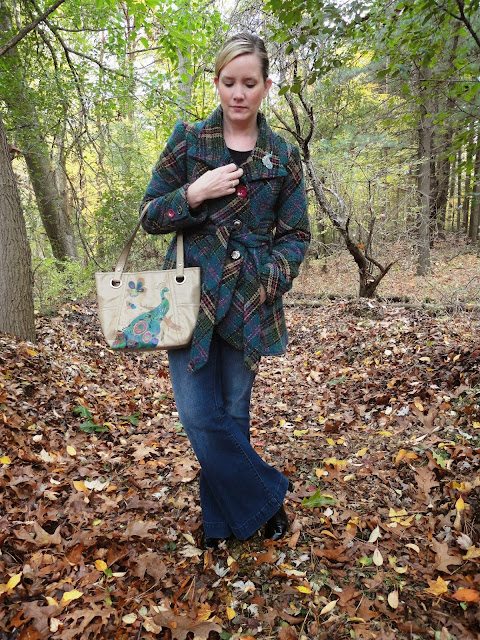 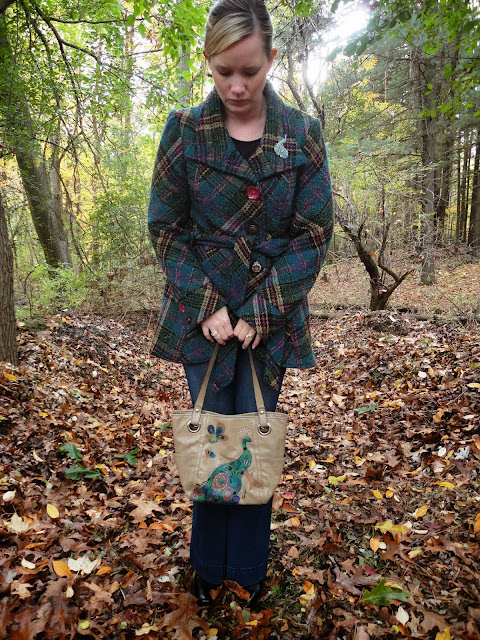 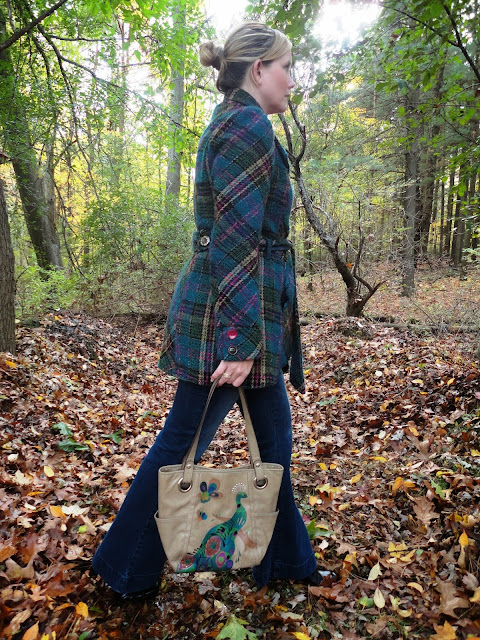 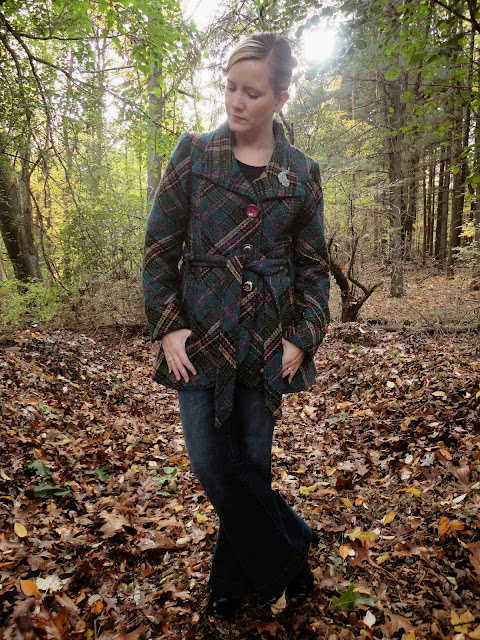 My latest purchase is what inspired me to do a post about my coats........ Our neighboring town, Marshall, has such a cute downtown area with unique shops. Back in July, we were there for a car cruise and I saw a top in a store window that I admired. The store was not open so I made a note to stop back sometime. Over the course of the months, I tried a few times and they were never open. There were no hours posted on the door either. I also tried calling several times with no luck and no information on their answering service. Last week, I saw an ad in the paper that said they were going out of business and that they were open 11-5, but no specifics on what days. Since I don't get over to Marshall much, I decided to call ahead to make sure they were open. I still had no luck but after a few days someone finally answered! They were open that day and only a few more after that. I quick ran over there to see what kind of deals I could find. The top I admired was long gone (I shouldn't be surprised) but this coat was the first thing I saw when I walked in. It immediately captivated me. I browsed around first before trying it on. Everything was half off for the liquidation. I was sold! I love the color, and the rosettes on the lapel! Yet another good find with the assurance that I probably won't see another one like it around here. The brand in Linea Domani, and I happen to also own a blazer by that line that I bought last year. I've enjoyed becoming familiar with this boutique brand. 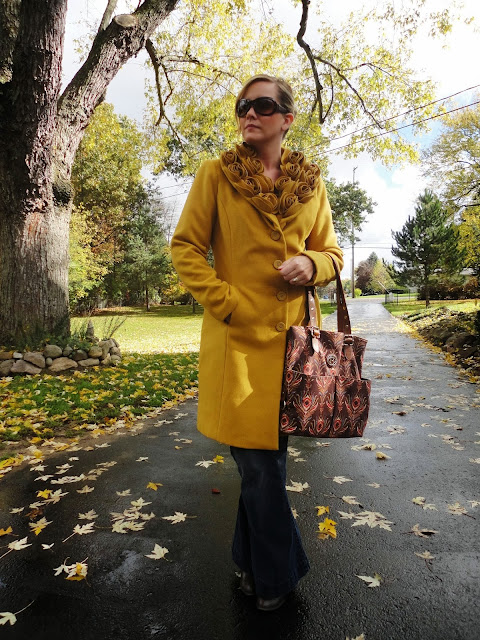 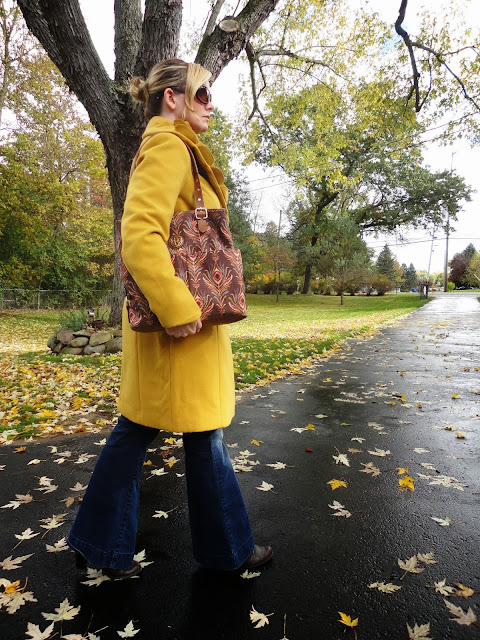 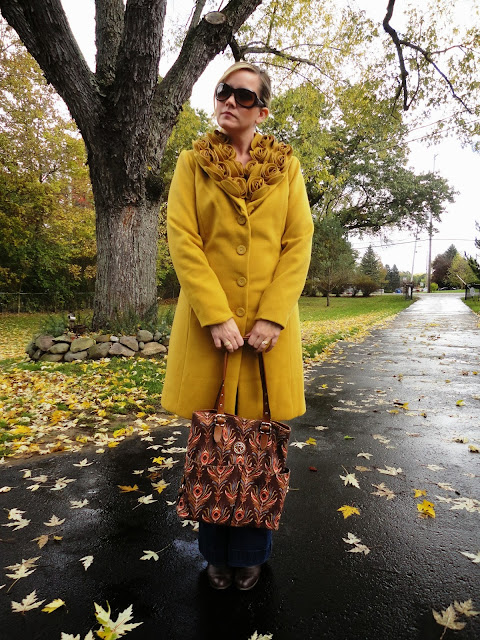 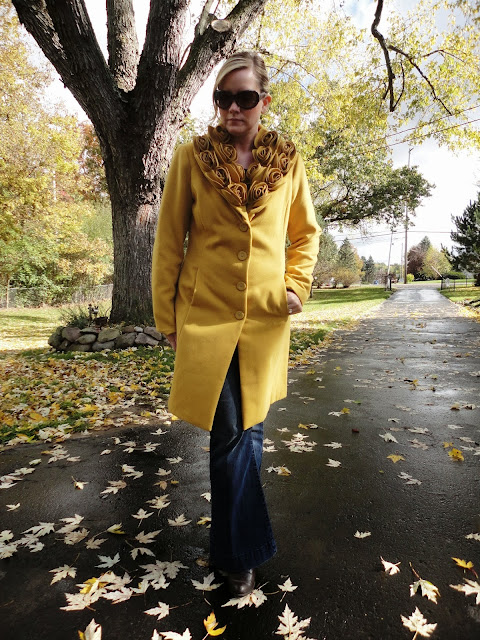 Purchasing a new coat was certainly not something I expected to do, and it was a bit ironic as well since my husband and I just had a conversation about the coat closet. By no means is it overflowing, and as you can see here I only own 3 coats. But, I do have a lot of jackets in there. He said, "I'll make a deal with you. If I get rid of 2 things, you get rid of 4." I responded by saying that I already had 2 jackets in mind that I wanted to bring to my local consignment shop......
But he didn't say anything about bringing home more now did he? I kid, I kid. He has not noticed my new acquisition yet, which is odd since it is BRIGHT YELLOW! Isn't that how it goes though? When you want them to notice something, they don't. And if you don't want them to notice something, they do. It will probably be December before he says anything so then when I respond that I've had this for months he won't believe me!
Notice my coordinating bags too? The first one is my handmade vintage suitcase of course, but the other 2 featured are everyday handbags for me. I thought it was worth mentioning that they are both Relic brand (Fossil's sister brand) which I got at Kohl's, as well as peacock motifs (what else?). The one with my plaid jacket I got last year, and it matches the colors in the coat perfectly! The one with my yellow coat I got this year, and it too blends nicely with the mustard.
Anyway, bring it on winter, I am stylishly ready for you!﻿
Posted by peacockfairy at 6:44 PM No comments: 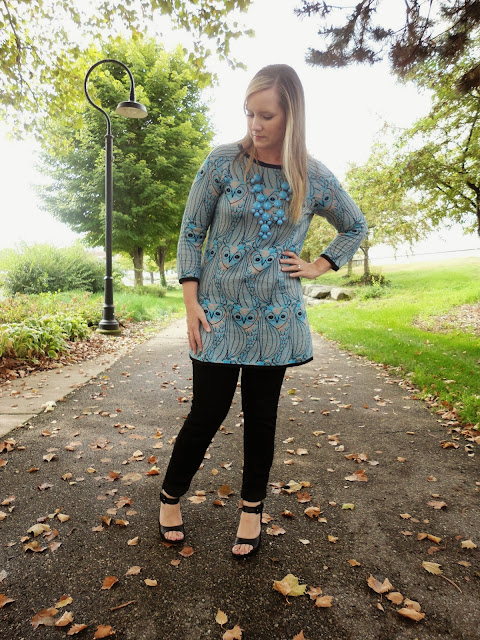 My birthday was a month ago, and it seems September just flew on by. So much change. So many highs and lows. Life is crazy right now.

I was able to sneak off to Anthropologie last weekend, to use my birthday discount and a gift card I had received. I couldn't pass up this owl sweater! 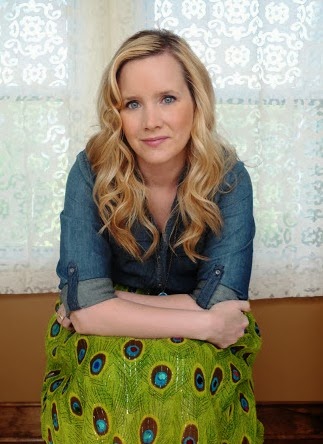 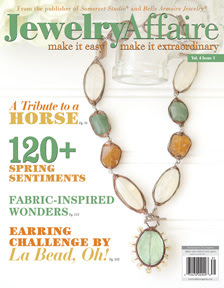